Our Facilities and History

History of our Congregation

Temple B’nai Jeshurun, founded in 1873, was the first Jewish congregation to be established in Des Moines. Orthodox in observance at first, the congregation soon became a charter member of the Union of American Hebrew Congregations, becoming the first Reform congregation in Iowa. B’nai Jeshurun means “children of righteousness”. It is a poetic name for the Jewish people, often used in the Bible to designate the ideal character of Israel. 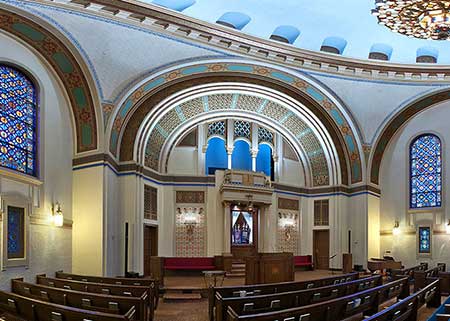 The Temple still holds to the goals of its founders: to maintain a synagogue as a center of worship, religious education and communal gathering; to foster a “living Judaism” not only in the Temple, but also in the homes and lives of its members and their families; and to adjust the teachings and practices of old to the needs of each new generation of American Jews. Rich in years and distinguished in history, Temple B’nai Jeshurun maintains its dedication to the highest ideal of Judaism and to the strengthening and survival of the Jewish people.

For the first five years after it was organized, the congregation held its services in a rented hall at 2nd and Court Avenues. In 1878 it purchased a building at 7th and Mulberry Streets, which it converted into a synagogue and in which it continued to worship for the next nine years. In 1883, feeling the need for larger quarters, the congregation purchased the lot at the southwest corner of 8th and Pleasant Streets, on which it erected the first Temple. The congregation worshipped in the Temple at 8th and Pleasant for forty-five years.

In 1931, under the pressure of its greatly enlarged needs, it began the erection of its present house of worship at the corner of Grand Avenue and Country Club Boulevard. The present Temple was dedicated on February 29, 1932.

Read about our Renovations 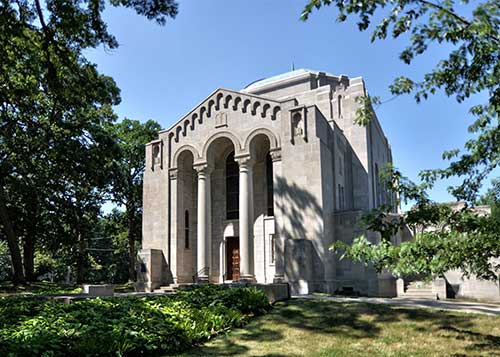 The congregation has been served by twenty one rabbis during its history, some of whom are listed among the notable figures of American Jewry. The most prominent of these was Rabbi Eugene Mannheimer, who served the Temple from 1905 – 1952.