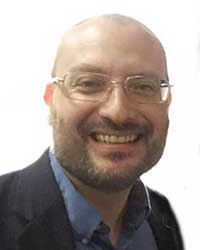 Rabbi David Kaufman has been the Rabbi of Temple B’nai Jeshurun, in Des Moines, Iowa, since May of 2003.

Born in St. Louis, Missouri, Rabbi Kaufman received his ordination from Hebrew Union College- Jewish Institute of Religion in Cincinnati in 2001. He holds Master’s Degrees in Hebrew Literature from HUC-JIR and in the History of Judaism from Duke University. Rabbi Kaufman did his undergraduate work at the University of North Carolina- Chapel Hill where he graduated with a double major in Religious Studies and Political Science.

Rabbi Kaufman is the immediate past President of the Midwest Association of Reform Rabbis, the regional association of rabbis in the Reform Movement. He also serves on the Board of the Des Moines Area Religious Council. Rabbi Kaufman is a regular contributor to meetings of the Jewish Community Relations Council and the Jewish Federation of Greater Des Moines and teaches in our community’s Jewish religious education programs. The rabbi also is on the Iowa Advisory Council of the US Global Leadership Coalition and is regularly involved in the clergy programs of the Interfaith Alliance and AMOS.

Rabbi Kaufman has been involved with AIPAC as a leading advocate for Reform Rabbis to become involved and in March will be attending his 13th AIPAC Policy Conference. Rabbi Kaufman originated and hosted the first five Reform Clergy gatherings at the Policy Conference which are now officially hosted by the Reform movement.

Rabbi Kaufman is considered a leading advocate for Israel and is the President and co-founder of We Are For Israel, a multi-national Israel advocacy organization that is the parent of Rabbis For Israel, a group of over 360 rabbis from around the world who believe in a two state solution to the Israeli-Palestinian conflict with a focus on maintaining the security of the Jewish state. During times of crisis in Israel, the blog’s posts are often read by thousands of people from around the world. See http://WeAreForIsrael.org

An advocate for many causes, Rabbi Kaufman serves on the Core Advisory Group of Act For Sudan, a group consisting of leaders of organizations seeking to combat genocide in Sudan and is a co-founder and advisor for the United Sudanese And South Sudanese Communities Association USASSCA, a group seeking to combat genocide throughout Sudan and to promote cooperation among pro-democracy Sudanese, South Sudanese, and diaspora groups. See http://SudanSouthSudan.com

Rabbi Kaufman has interviewed numerous leading advocates for Israel along with leading social issue advocates, political activists, journalists, bloggers and religious leaders from around the world over the years as part of his internet television shows, links to which may be found at www.12Talk2.com

Rabbi Kaufman speaks to numerous religious and advocacy organizations and is well known for teaching to interfaith audiences about the Middle East, Israel, Judaism and Jewish history. His most recent class for the Robert Ray Society of Drake University was on the “Changing Face of the Middle East” and was attended by almost 100 people each week. Rabbi Kaufman enjoys science fiction, Fantasy Football, photography and playing videos games. Over the past year, he has become an avid runner, recently joining his wife and daughter in having completed a half marathon.

Rabbi Kaufman has been married to Julie since 1994 and they have three children. 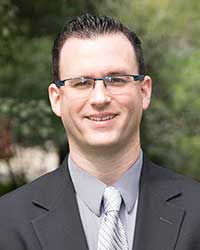 Born in Guthrie Center and a resident of Des Moines since age two, prior to joining the Temple staff,  David had been in the employ of the Catholic Diocese of Des Moines. After much contemplation David has choose to leave the Diocese of Des Moines and pursue a different path in life. In David’s own words, “I still have a great desire to serve people.” David’s experience managing all aspects of a faith community makes him well qualified for the position of Executive Director. He is very familiar with all social media applications and has used them successfully to connect with the people that he served.

Again in David’s words, “though I am not Jewish, my previous training has given me a very good understanding of the Jewish faith and its practices. I very much look forward to growing even deeper in my understanding of the communal prayer and worship of the Jewish community.”  Please stop by, meet David, and help introduce him to our Temple family. 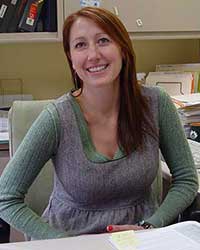 Erin Plank grew up in Des Moines and attended college at the University of Northern Iowa, earning her Bachelor’s degree in Communication Studies. Shortly after graduating, she moved to Fort Lauderdale, Florida where the winters are warm and the days are mostly sunny. She worked at the Jewish Federation of South Palm Beach County in Boca Raton for about 3 years first as a Reservations Administrator and then as the Assistant to the Director of I/T. Being dedicated to working in the non-profit sector, she then accepted a position as Cord Blood Program Coordinator at the Gift of Life Bone Marrow Foundation.

In May of 2011, she married her best friend Josh in Key West and they decided to move back home to be closer to family. After traveling to the Pacific Northwest for a month in September, they are now happy to call Des Moines home. In her free time, she enjoys running, traveling, music and spending time with her loved ones.

Wendy moved to Des Moines in December of 1981 from Minneapolis, Minnesota. She currently lives in West Des Moines and has three wonderful children: Edye, Amy and Steven. Amy is married to Jamie. They have three children: Jayden, James and Amina months old. Wendy loves her grandchildren very much. Loves Red Heads.

Wendy had her Bat Mitzvah on May 9, 1987 along with 9 others of the Des Moines Community. She gave up her career as a Pediatric Dental Assistant after her Bat Mitzvah to continue her studies for her new career in Jewish Education.

For over 25 years Wendy has been the B’nai Mitzvah Coordinator at Temple B’nai Jeshurun. Wendy has worked with over 267 Temple Students, 108 Tifereth Israel Students (Conservative Congregation) 7 Beth El Students (Orthodox Congregation), 21 Ames Students and 52 Adults from the Temple to prepare them for their B’nai Mitzvah. Wendy is definitely community friendly.
Wendy, along with daughter Amy, are the Youth Group Advisors for the Junior and Senior Youth Groups.

Wendy also takes on the role as Assistant to the Rabbi. When Rabbi is out of town, Wendy officiates at Funerals, Shivah Minyanim, leading services on Shabbat, Hospice and Hospital Visits.

Wendy is a member of Kol B’yachad (Temple Choir), Heads up the WE DO Group at the Temple (Women of Experience Dining Out). This is a group that meets once a month for lunch and stimulating conversation. She is a member of the Worship Committee, Caring Committee, Membership Committee and Sisterhood. She is one very busy lady.

Wendy also teaches at Beit Sefer Shalom. This is our community Religious School. Wendy has taught in the school for 25 years. She helps to coordinate the Hebrew Program, lead prayer practice, teach 6th grade Torah and Haftarah Trope and helps to prepare our students for B’nai Mitzvah. 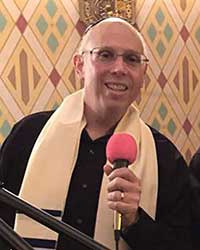 Since 2010, Ira Lacher, accompanied by accomplished guitarist Sam Miller, has led congregants in musical worship for Shabbat, High Holy Days and other festivals along with life-journey occasions.

A Temple member with his wife, Lisa, since 1991, Ira began singing at the Temple with the newly formed adult volunteer choir in 1993, and continued in choirs led by Cantor Lisa Levine and Cantorial Soloist Laura Berkson.

The Bronx, New York, native has also written, produced and directed a number of Temple Purimspiels, and can occasionally be seen performing in community theater throughout the Des Moines area. 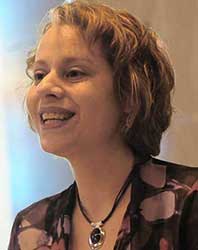 Laura Sparks has been singing as a Cantorial Soloist at Temple B’nai Jeshurun since 2010. She is passionate about music, which was perhaps inevitable, having grown up in a family of musicians. Singing has been a constant in her life throughout many endeavors and across several cities.

Raised in Iowa, Laura earned her degree in Theatre Arts from the University of Iowa. She lived and pursued theatre in Boston and Chicago before staying for a decade in San Francisco. There she discovered her love of Jewish liturgical music as a singer in High Holiday choirs at B’nai Emunah and Beth Sholom.

After moving to Des Moines in 2004, Laura became active in musical and other activities at the Temple and around town. She sang with the Des Moines Choral Society for several seasons, as well as with Temple B’nai Jeshurun’s volunteer choir, and played a wide assortment of heroes and villains in several of the Temple’s Purimspiels. She serves on the Temple’s Board of Directors as chair of the Music Committee.

She enjoys acting in local theatre productions, and strumming her ukulele, which she will occasionally play at services, at the Jewish Senior Life Center, and for other special occasions. She lives in Des Moines with her husband George and their two sons, Nathan and Toby.

Laura will be delighted to see you at Family Shabbat and other Erev Shabbat services, holiday celebrations, and b’nai mitzvoth. When you come, she hopes you will sing along! 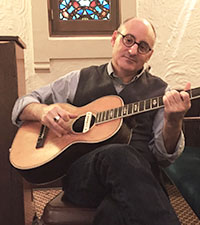 Sam Miller has been performing professionally around central Iowa since the early 1990’s. He was a founding member of the blues-rock band The Accidental Sisters, performing and recording original material, and receiving local critical acclaim. He later founded The 2nd Avenue Jazz Band, specializing in mainstream jazz taken primarily from the great American songbook. As a solo guitar/vocalist, he performs roots blues, jazz, and ragtime in local taverns, coffee shops, and private and public receptions.

Sam has sat in the band pit of several Temple Purim Spiels, provided entertainment at various Jewish Food Fairs, and coordinated two seasons of Beit Café. In 2010 he became part of the Temple’s volunteer cantorial core serving as guitar accompanist for Shabbat services, b’nai mitzvot, holiday observances, and other Temple events. He has also served on the Temple board as chair of the music committee, and has been a long-standing regular attendee of the Temple Torah study.